Due to the international nature of Assembly we are releasing this information in English.

The first question for many of you is probably “What is Assembly?”. Assembly is an international demo party held at Hartwall Areena in Helsinki, Finland. This year it’s from the 2nd of August to 5th of August, lasting 4 days in total.

Assembly is one of the biggest events in Europe of its kind, with over 5000 visitors every year. It’s a special event in the sense that the whole arena is filled with computer places. It’s a massive LAN party with 2500 sold out computer places this year.

This year Bitcoin is going to be at the event, keep reading to find out more!

Yes, there is going to be a Bitcoin meetup! Anyone can join us at the meeting, Assembly ticket is not a requirement. There will be plenty of Finnish Bitcoin enthusiasts at the meeting and hopefully some international friends as well.

There is a Bitcoin presentation at Assembly which is called Bitcoin: The Future of Money. The description for the presentation is as follows:

Bitcoin is an open source digital currency that has been making waves ever since it was created in 2009. In just 3 years Bitcoin has managed to become a controversial force of change. It removes the need for middlemen such as banks and has proven itself to be a real candidate for a universal currency. How does it work? Is Bitcoin safe? Why is it such a big deal anyway? This presentation will answer all of these questions and more. 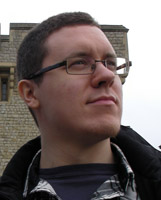 We are organizing two Bitcoin competitions at Assembly, both of them with good prizes. The first competition is about finding hidden QR codes at the event place and sending bitcoins to the addresses stored in those codes. The second competition is finding out who is the fastest miner at Assembly.

Instructions for the competitions:

There is of course going to be a Bitcoin booth at the event. Bittiraha.fi is making that possible with the support of BitPay, Easywallet and LocalBitcoins.

At the booth you’ll find us and the developers of Easywallet and LocalBitcoins. You can buy bitcoins with cash throughout the event. You can buy Bitcoin shirts, Casascius coins, Bitcoin Magazines, even pillows and earplugs! 🙂

Everything can be bought with bitcoins of course, actually there will be discount prices for buying with bitcoins.

On top of this we will show off some mining hardware so everyone can see how exactly the Bitcoin network is operated. Finally I’ll present the Bitcoin poster that we have made for the event. This poster will be around the event place and it will be distributed in flyer form as well. 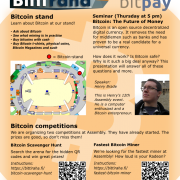 Hopefully we will see a lot of Bitcoin supporters at the event. See you there!